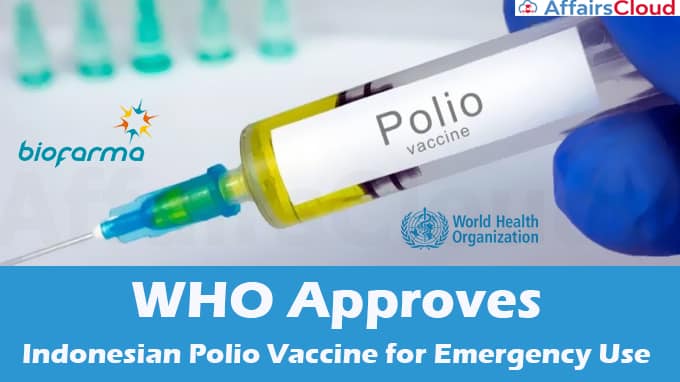 The World Health Organization (WHO) listed nOPV2 (novel Oral Polio Taccine type 2) Polio vaccine produced by Indonesia’s Bio Farma PT for Emergency Use Listing (EUL), this is the first approval by WHO of its kind amidst several outbreaks in several parts of the world.

ii.VDPVs are caused by the virus strains used in the polio vaccines regaining their ability to cause polio.

ii.The main objective behind EUL is to make the medicines, vaccines and diagnostics available faster to address the emergency (Public Health Emergency of International Concern).

ii.Numerous COVID-19 diagnostics have also been listed under the procedure, however nOPV2 is the first such listing for a vaccine.

iii.The Recent listing would pave the way for similar measures to be adopted for a COVID-19 product.

iii.The data is then reviewed by independent experts who consider the body of evidence on the vaccine under consideration, the plans for monitoring its use, and for further studies.