On 5th October 2015 Nobel Committee for Physiology or Medicine has announced the winners.The recipients of the award are : 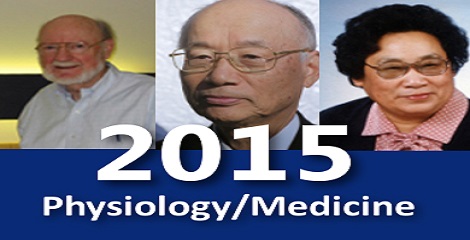 The details are given below:

Ōmura isolated new strains of Streptomyces( known to produce a plethora of agents with antibacterial activities ) from soil samples and successfully cultured them in the laboratory.William C. Campbell, collected  Ōmura’s Streptomyces cultures and examined their efficacy. Campbell showed that a component from one of the cultures was remarkably efficient against parasites in domestic and farm animals. The bioactive agent was purified and named Avermectin, which was subsequently chemically modified to a more effective compound called Ivermectin.Ivermectin tested in humans with parasitic infections and effectively killed parasite larvae.Conjointly their contributions led to the discovery of a new class of drugs with extraordinary efficacy against parasitic diseases.

Discovery : A novel therapy against infections caused by roundworm parasites.

Avermectin, the derivatives of which have radically lowered the incidence of River Blindness and Lymphatic Filariasis, as well as showing efficacy against an expanding number of other parasitic diseases.

Youyou Tu turned to traditional herbal medicine to tackle the challenge of developing novel Malaria therapies. From a large-scale screen ,an extract from the plant Artemisia annua emerged as an interesting suitor.However, the results were uncertain, so Tu revisited the ancient literature and discovered clues that guided her in hunt to successfully extract the active component from Artemisia annua. Tu was the first to show that this component, later called Artemisinin, was highly effective against the Malaria parasite, both in infected animals and in humans.Artemisinin represents a new class of antimalarial agents that rapidly kill the Malaria parasites at an early stage of their development, which explains its unprecedented potency in the treatment of severe Malaria.

Discovery : A novel therapy for malaria.

Born in 1935 in , Japan . From 2007onwards, Satoshi Ōmura has been Professor Emeritus at Kitasato University.

Born in 1930 in China.From 2000 onwards , Tu has been Chief Professor at the China Academy of Traditional Chinese Medicine.