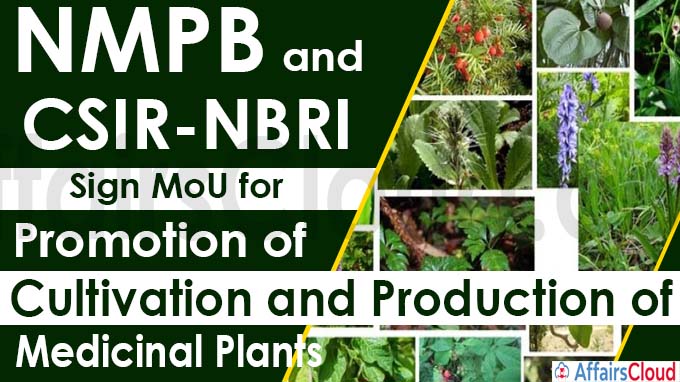 The National Medicinal Plant Board (NMPB) and the National Botanical Research Institute (CSIR-NBRI) have signed a Memorandum of Understanding(MoU) for the promotion of cultivation and production of medicinal plants and herbs in India.

i.To facilitate the development of Quality Planting Material (QPM) of medicinal plants and herbs identified by the NMPB

iii.To help in development, promotion, conservation and cultivation of the appropriate medicinal plants in different agro-climatic zones including,

i.Helps in carrying out the potential medicinal plant species with high commercial value for the Germplasm collection/conservation by CSIR-NBRI.

On 7th April 2021, the National Medicinal Plants Board (NMPB) of the Ministry of AYUSH signed a Memorandum of Understanding (MoU) with the Department of Animal Husbandry & Dairying for formulating new drugs using medicinal herbs for the use of veterinary science.

The CSIR-National Botanical Research Institute (NBRI) is a constituent research institute of the Council of Scientific and Industrial Research (CSIR).Originally set up as the National Botanic Gardens (NBG) by the State Government of Uttar Pradesh, it was taken over by the CSIR in 1953.It was renamed as NBRI in 1978.
Director:S.K.Barik
Headquarters:Lucknow,Uttar Pradesh

The National Medicinal Plants Board (NMPB) was established in 2000 under the Ministry of Ayurveda, Yoga & Naturopathy, Unani, Siddha & Homeopathy (AYUSH)  by the Government of India to coordinate with all matters relating to Medicinal Plants.
Chief Executive Officer(CEO): Dr JLN Sastry
Headquarters:New Delhi