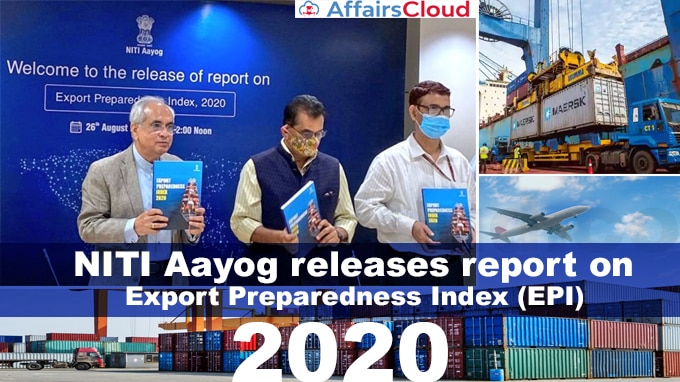 On 26th August 2020, NITI Aayog in partnership with Institute of Competitiveness released the Export Preparedness Index (EPI) 2020, this is the first report to examine export preparedness and performance of the states of India. Gujarat was identified as the top performing state in the category of Coastal state and also topped the Overall rankings.

i.The framework of the EPI is based on the feedback from the states, Union Territories(UT) and organisations like Export-Import Bank of India (EXIM Bank), Indian Institute of Foreign Trade (IIFT) and Directorate General of Commercial Intelligence and Statistics (DGCIS).

ii.Reserve Bank of India(RBI), DGCIS and Central ministries were consulted for some of the indicators.

i.The EPI 2020 evaluates the true potential and capacities of the Indian States.

ii.It also provides the detailed insights to guide the stakeholders towards strengthening the national and international level export ecosystem.

iii.This data driven effort identifies the core areas that are significant to promote the exports at sub national level.

iv.This index will support the state governments to achieve the benchmark regional performance in export promotion and provide insights on how to improve

i.The landlocked states, Chhattisgarh and Jharkhand had taken several measures to promote exports which can be implemented by the other states with similar socio-economic challenges.

ii.The Northeastern states under the Growth orientation sub pillar focused on the indigenous products like spices to promote their exports.

iii.Among the 8 Coastal States, 6 states occupied the positions among the top 10 ranking which indicates the strong enabling and facilitating factors to promote exports.

i.Latest ranking based on fastest growing urban regions/ fastest growing cities in the world was released by the Economist Intelligence Unit (EIU). as per the report 3 of the cities in Kerala were ranked in the top 10 places.

ii.According to the rankings of ‘Central and state governmental water departments based on their efficiency targets for 2019’ released by the Ministry of Jal Shakti, Gujarat ranked the best for parameters on efficiency targets, while National Capital Territory of Delhi remains in the worst-performing state category.