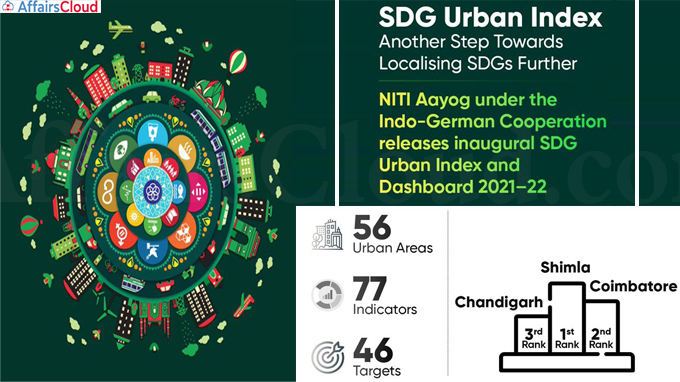 Significance of Index and Dashboard:

ii.To highlight the strengths and gaps of ULB-level data, monitoring, and reporting systems.

The statistical methodology for the SDG Urban Index is based upon globally accepted methodology developed by the Sustainable Development Solutions Network (SDSN). It was finalized in close collaboration with the Ministry of Statistics and Programme Implementation (MoSPI). The indicators are also aligned with MoSPI’s National Indicator Framework.

i.SDG 14 (life below water), and SDG 17 (partnerships for the goals) have not been included.

ii.Out of 56 urban areas ranked in the index, 44 are with populations of above one million.

iii.For each SDG, the urban areas are ranked on a scale of 0-100. A score of 100 implies that the urban area has achieved the targets set for 2030. The Urban areas have been classified as below based on their composite score:

Other Highlights from Index:

i.According to the index, 55 out of 56 urban areas assessed under SDG 2 (Zero hunger) have 25% anaemia prevalence among women aged 15-49 years.

ii.96.4% of urban areas have a pupil-teacher ratio at the secondary level of less than 30 in the assessed cities.

iii.21 out of 56 areas treat 100% of their generated municipal solid waste.

v.Atleast 9 in 10 households have access to improved sanitation facilities in 35 out of the total accessed cities.

During the launch event, a Statement of Intent (SoI) was also signed between NITI Aayog and BMZ to promote cooperation between India and Germany. Under this SoI, “NITI- BMZ Dialogue on Development Cooperation” will be established for periodic bilateral discussions, sharing of developmental policy experiences and to review other ongoing bilateral programs.