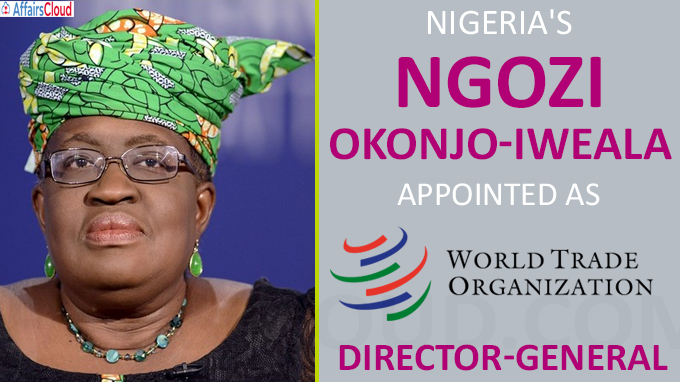 On 15th February 2021, Ngozi Okonjo-Iweala from Nigeria was appointed as the 7th Director General of the World Trade Organisation(WTO), multilateral trade body. She will hold the position from 1st March 2021 to 31st August 2025. She succeeds former Director-General Roberto Azevêdo who announced his retirement 1 year before the expiry of his tenure.

ii.She served as the Managing Director of the World Bank overseeing an 82 billion USD portfolio in Africa, South Asia, Europe and Central Asia.

iii.She is the Co-Chair of the Global Commission on the Economy and Climate and she is also a member of the Boards of Standard Chartered PLC and Twitter Inc

v.She was also appointed to the Special Envoys of the African Union (AU) on COVID-19 and World Health Organisation WHO COVID-19 Special Envoy (ACT-Accelerator).

She has authored numerous articles on Finance and development.

She has also authored various books which includes,

i.She has received the International Service Award 2020 of the World Affairs Councils of America and the Aminu Kano Award for Leadership (2020).

ii.She was named Forbes African of the year 2020.

On May 21, 2020, The World Bank named former Bear Stearns executive Carmen Reinhart as its new Vice President (VP) and chief economist, tapping an expert on financial crisis who also serves on the advisory board of the New York Federal Reserve. Reinhart’s appointment is effective on June 15, 2020.

About World Trade Organisation:
WTO deals with the global rules of trade between the countries.