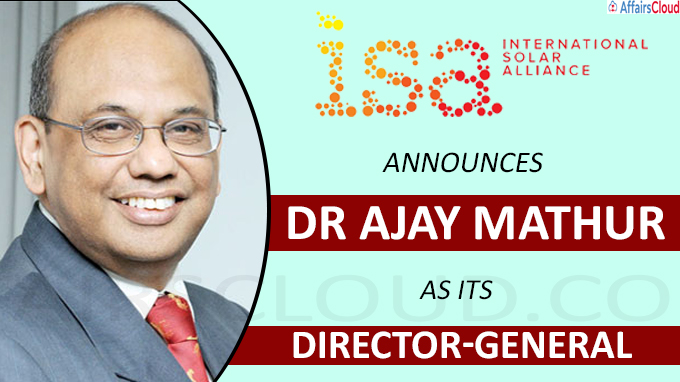 Dr Ajay Mathur has been named as the new Director-General of  International Solar Alliance (ISA) following his election at the 1st special Assembly of ISA members that was held virtually on February 15, 2021. He succeeds Upendra Tripathy who was in the position since ISA was founded in 2015.

ii.He is a member of the Prime Minister’s Council on Climate Change.

iii.He  served as Director General of the Bureau of Energy Efficiency in the Government of India from 2006 till February, 2016,

i.Earlier to his position in ISA, he served as the Secretary to Government of India in the Ministry of New and Renewable energy

ii.He served as the Adviser (Trade) in the Indian Embassy in Brussels.

iii.He also held the post of Additional Secretary, Cabinet Secretariat, Joint Secretary, among others in the central government.

i.It is a treaty-based intergovernmental organisation launched by Prime Minister Narendra Modi of India and Former President François Hollande of France at the UN Climate Change Conference in Paris on 30 November, 2015.

ii.It is the first treaty-based international government organization to be based in India.

i.It was formed as a coalition of solar-resource-rich countries to address their special energy needs.

ii.It also has been conceived as an action-oriented, member-driven, collaborative platform to increase the deployment of solar energy technologies.

iii.This is to boost energy security and sustainable development as well as  to improve access to energy in developing member countries.

i.To contribute to the implementation of the Paris Climate Agreement through rapid and massive deployment of solar energy.

iiTo mobilize over USD 1 trillion of investment into solar projects by 2030.

It has 122 sun-belt countries that lie between the two tropics as its prospective member countries and currently has a membership of 86 countries globally.