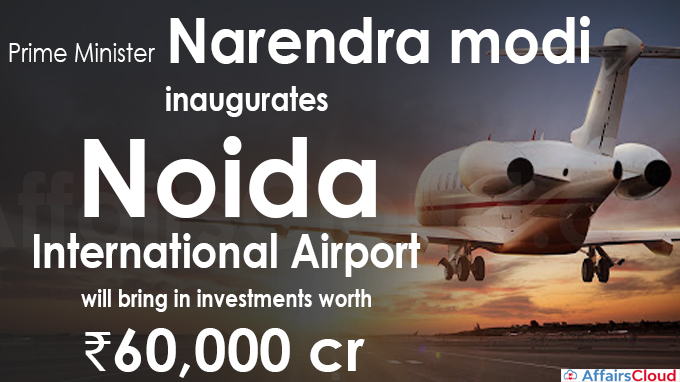 i.It will be India’s first net zero emissions airport. It has earmarked dedicated land to be developed as a forest park using trees from the project site.

ii.This is also the first time in India, an airport has been conceptualised with an integrated multi-modal cargo hub.

iii.Once operational, UP will become the state with maximum airport i.e. 5, Kerala follows UP with 4 Airport.

ii.The project will be implemented by Noida International Airport Limited (NIAL), which is a joint-venture company.

iii.YEIDA under the UP Government is the Nodal department for the development of the project.

The estimated cost of the proposed project is Rs 15000- 20000 crore and the development of the first phase of the airport is being done at a cost of around Rs 10,050 crore.

i.Noida Airport will become the logistics gateway of north India.

ii.It will act as one of the pillars of the National Gati-Shakti Master Plan.

iii.This airport will be the second international airport to come up in Delhi NCR (National Capital Region).

v.The project will be completed in 4 phases.  As per Concession Agreement, the first phase will have a capacity to serve around 1.2 crore passengers a year and work on it is scheduled to be completed by September 29, 2024.

vi.The airport hosts multi-modal connectivity and expects to bring in investments worth Rs 60,000 crore for UP.

The Chief Minister (CM) of Uttar Pradesh (UP) Yogi Adityanath has announced the launch of ‘Uttar Pradesh Matra Bhumi Yojana‘ while virtually laying other road projects under the Pradhan Mantri Gramin Sadak yojana (PMGSY). This scheme will strengthen the rural economy and infrastructure in the state.