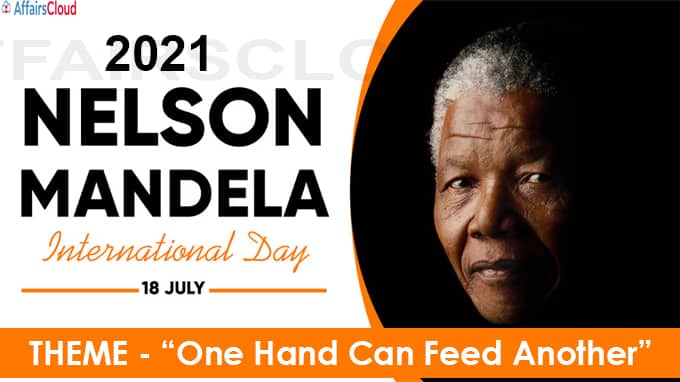 The United Nations(UN)’s Nelson Mandela International Day is annually observed across the globe on 18th July to recognise the contributions of Nelson Mandela towards justice, peace and dialogue and his role in Africa’s struggle for liberation and unity.

The day also marks the birth anniversary of Rolihlahla Nelson Mandela who played a major role in creating a non-racial, non-sexist and democratic South Africa.

The day is also known as “Mandela Day”.

The theme of the 2021 Nelson Mandela International Day is “One Hand Can Feed Another”.

iii.The resolution also acknowledged the international campaign of the Nelson Mandela Foundation and other related organisations on observing the birth anniversary of Nelson Mandela as “Mandela Day” on 18th July 2009.

ii.He was fondly known as ‘Madiba’ which in Xhosa means “Father of the Nation”.

iii.On 10th May 1994, he was inaugurated as the first democratically elected President of South Africa and also the first black president of the country.

i.He jointly received the Nobel Peace Prize in 1993 with Frederik Willem de Klerk for peacefully bringing down the Apartheid system and establishing the groundwork for democracy.

ii.Bharat Ratna, India’s highest civilian honour was presented to him in 1990.

i.The UN established the Nelson Rolihlahla Mandela Prize, in 2014 which will be presented once every 5 years as a tribute to the achievements and contributions of 2 laureates (one female and one male).