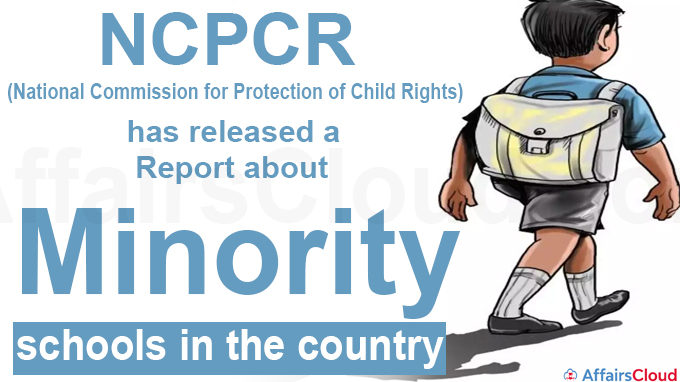 The National Commission for Protection of Child Rights (NCPCR) conducted a nationwide assessment of minority schools and released a report titled ‘Impact of Exemption under Article 15 (5) with regards to Article 21A of the Constitution of India on Education of Minority Communities’.

Key analysis of the Report:

iii.The minority schools have only 7.95 percent of the minority children population in the states.

i.It is India’s 2nd largest denomination community after Hindus and it accounts for 13.43 percent of the Indian population.

iii.This community has the largest number of out-of-school children of about 1.1 crores.

Note – Institutions that are providing education to children (in the age group of 6-14 years) from the Muslim community are Maktabs and Madrasas.

Some of the Recommendations of the Report:

i.The NCPCR committee has recommended undertaking a survey to identify the number of out-of-school children and unrecognised minority institutions.

ii.It insisted on the need to extend the provisions of the Right to Education (RTE) Act to minority educational institutions.

iii.Recommended to make regulations to maintain the proportion of the number of minority schools with the minority population. Click here to know more

i.In 2002, the 86th Amendment to the Constitution of India provided the RTE as a fundamental right in Part III of the Constitution and inserted Article 21A to make RTE for children between 6-14 years.

ii.Article 21A: In 2009, Article 21A was operationalised with the RTE Act to provide free and compulsory education to all children of the age of 6 to 14 years as a Fundamental Right.

iv.Article 30 (1): It provides the right to all minorities to establish and administer educational institutions of their choice.

Note – The Child is defined as a person in the 0 to 18 years of age group.

According to the ‘Annual report of the Secretary-General on Children and Armed Conflict (CAAC)’ released by the office of the UN Special Representative of the Secretary-General for Children and Armed Conflict (SRSG CAAC)- More than 19,300 boys and girls were affected by war in 2020 were victims of grave violations like abduction, recruitment or sexual violence.

About National Commission for Protection of Child Rights (NCPCR):

It is a statutory body under the Commissions for Protection of Child Rights (CPCR) Act, 2005 under the administrative control of the Ministry of Women & Child Development.