On February 27, 2020,According to the 1st edition of  NCAER Land Records and Services Index (N-LRSI 2019-20) released by the National Council of Applied Economic Research (NCAER) , Madhya Pradesh (MP) emerged as the best performing state in terms of digitising land records with the score of 74.9.It was  followed by Odisha (67.5points) and Maharashtra (65.3 points).
While Union Territory (UT) of Ladakh ranked at bottom at 33rd position with a score of 2.0. 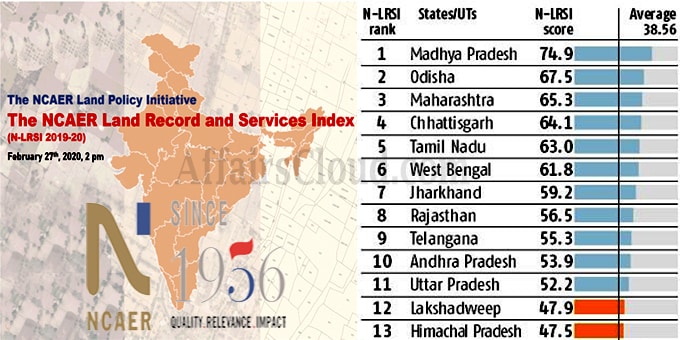 i.The Index has been released during a half-day programme held in New Delhi by NCAER under the aegis of the NCAER Land Policy Initiative (NLPI), supported by the Omidyar Network, India.

ii.The Index ranked 33 states and Union Territories (UT) based on data collected over 2019-20 on 2 tools of the supply of land records-the extent of digitisation of land records and the quality of these land records.

The 1st tool aims to ensure all state has made all its land records digitally available to people & oversees 3 main areas namely-the text of the land records (also called the record of rights), the official map associated with a land record (also called cadastral maps), and the property registration process.

The 2nd tool aims to ensure all the land records are comprehensive ,reliable and type of land use, land area on the record and on the map, landlords details are updated as soon as a sale happened, etc.