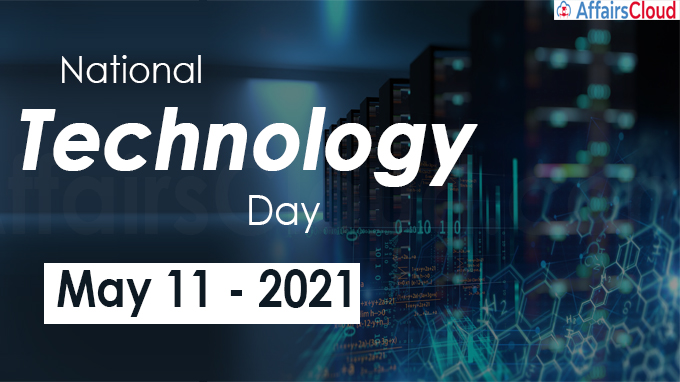 The National Technology Day is annually observed across India on 11th May to celebrate India’s major advancement in the field of Science and Technology. The day marks the anniversary of the 1998 Pokhran Nuclear tests, a series of 5 nuclear tests conducted by India. The day also marks the first flight of the first indigenous aircraft “Hansa-3”.

The theme of National Technology Day 2021 is “Science and Technology for a Sustainable Future”.

The day also celebrates the various achievements of India in the field of Technology and innovation. Annually the theme of the day is decided by the Technology Development Board(TDB), under the department of Science and Technology(DST).

i.Prime Minister Atal Bihari Vajpayee (1998 – 2004) declared the 11th May as the National Technology Day to mark the successful nuclear test conducted at the Indian Army’s Pokhran Test Range, Rajasthan in 1998.

ii.The first National Technology Day was celebrated on 11th May 1999.

iv.The test was conducted in collaboration with Bhabha Atomic Research Centre (BARC), Atomic Minerals Directorate for Exploration and Research (AMDER) and scientists from the Defence Research and Development Organisation (DRDO).