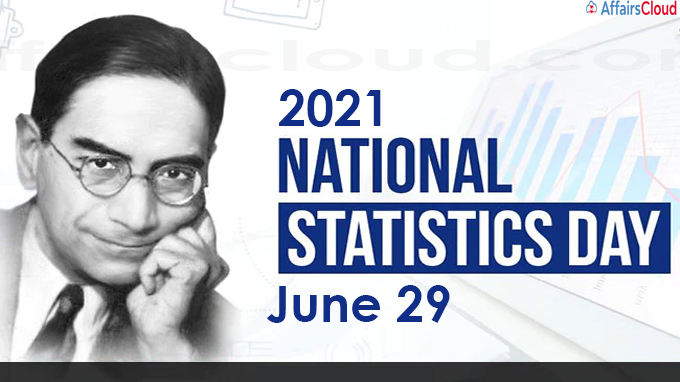 The National Statistics Day is annually observed on 29th June to popularise the use of Statistics in everyday life and sensitise the public as to how Statistics helps in shaping and framing policies. The day also commemorates the birth anniversary of Padma Vibhushan Prof Prasanta Chandra Mahalanobis (P C Mahalanobis) who was referred to as the “Father of Indian Statistics”.

To popularise the use of Statistics in everyday life and to create awareness on the benefits of Statistics towards framing policies.

‘Provisional Coal Statistics 2020-21’:
i.As a part of the celebration of the National Statistics Day, Pralhad Joshi, Union Minister of
Coal, Mines and Parliamentary Affairs, released the ‘Provisional Coal Statistics 2020-21’,
one of the 2 flagship publications of the  Coal Controller’s Organization(CCO), a subordinate
office under the Ministry of Coal(MoC).
ii.The publication was released over a video conference organised by the MoC.
iii.The publication can be accessed on the official website of the CCO and MoC.

Gist of the publication:
i.The ‘Provisional Coal Statistics 2020-21’ features the provisional information on the
performance of the Coal and Lignite sector in the last fiscal year 2020-21.
ii.The publication also provides the ready reference of the data to the stakeholders, policy
planners, researchers, National Institutes and International Institutes and individuals.
iii.This also includes the pre-audited data and the final data for 2020-2021 would be
published in the Coal Directory of India 2020-21.

i.The Event of the National Statistics Day 2021 was organised through webcasting at NITI Aayog, New Delhi.

i.P C Mahalanobis born on 29th June 1893 in Kolkata, West Bengal was an eminent statistician who has served as an advisor to the Government of India.

ii.He was one of the members of the first Planning Commission of India.

iv.The government of India honoured him with Padma Vibhushan in 1968 for Literature and education.

i.He has made several contributions to the field of Statistics, which includes ‘Mahalanobis distance’, a statistical measure.

ii.He also developed the Feldman-Mahalanobis model, a Neo-Marxian model of economic development, which was employed in the Second Five Year Plan of India, which promoted the industrialisation of India.

i.The Mahalanobis International Award is sponsored by the Ministry of Statistics and Programme Implementation of the Government of India.

ii.The award recognises the achievements of the individuals in statistics in developing countries or regions.

This formula is used to find the distance between a point and a distribution. It is based on measurements in multiple dimensions. This formula is widely used in the field of cluster analysis and classification.