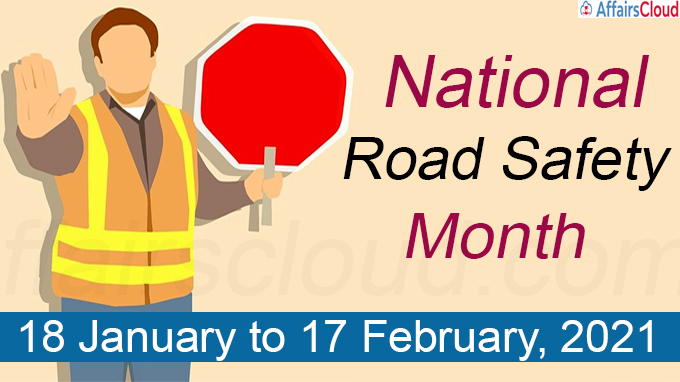 The Ministry of Road Transport and Highway(MoRTH) observes the first National Road Safety Month from 18th January 2021 to 17th February 2021, instead of the 32nd National Road Safety Week, to create and spread awareness about road safety and its importance in reducing the road accidents in India.

The Ministry of Road Transport and Highway(MoRTH) annually observes the National Road Safety Week during the second week of January.

The first National Road Safety week was observed in 1989.

ii.As a part of the celebration of the National Road Safety Month, various activities and programmes will be organised across India which includes, launch of a film on Road Safety, flagging off of a National Championship Safe Speed Challenge from Wagah border to Kanyakumari.

iii.The state governments and other sectors will also participate in the awareness activings like seminars, walkathons, poster making competitions and others.

i.Nitin Gadkari stated that the Ministry has achieved the target of constructing 30 kilometers of roads and expects to achieve the target of 40 km of road per day by March 2021.He also stated that India will be able to reduce the fatalities and road accidents by 50% before 2025

ii.The World Bank and Asian Development Bank(ADB) has approved 2 projects worth Rs.7000 crore each, which will be used to improve the black spots on the road.

iii.In 2020, the government of India participated in a conference in Sweden where it has conceptualised the vision to have zero road fatalities in India by 2030.

Tamil Nadu has reduced the road fatalities with a success rate of 53% and reduced the number of road accidents by 34% in 2020.