Amid strong protests by the medical fraternity, the Rajya Sabha passed the controversial National Medical Commission (NMC) bill 2019 which is proposed to bring one of the biggest reforms in medical education. 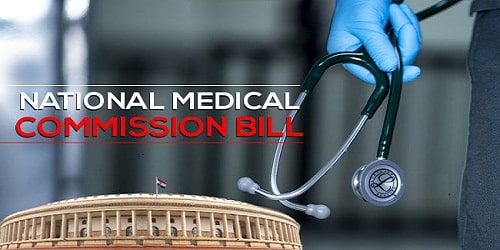 Reason for replacement
MCI was dissolved in the year 2010 due to the corruption charges faced by its president Ketan Desai by the CBI (Central Bureau of Investigation).

Implementation
The NEXT exam is expected to be implemented within three years of NMC’s approval.

Community Health Provider
The bill may grant limited licence to practice medicine at mid level as a Community Healthprovider to persons connected with modern scientific medical profession under specified regulations.

Objections
The NMC bill is opposed by many medical students,doctors and members of the Indian Medical Association (IMA) which is a voluntary organisation of doctors having over 3 lakh members, with wide protests across the country.

Protests
Over the past few days, medical students across the country has started a big protest against the NMC bill with hunger strikes, boycotting of classes and marches to the governor’s offices.