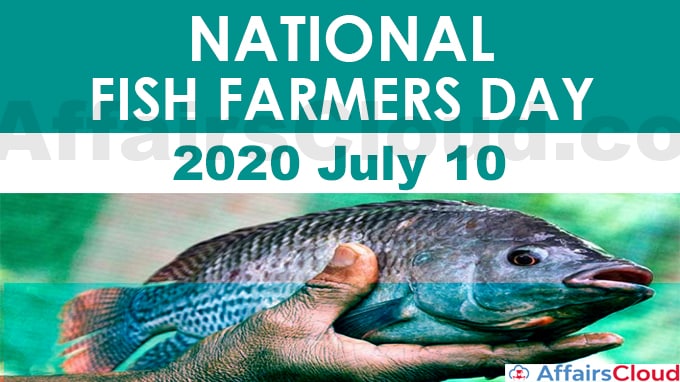 10th July of every year is observed as the National Fish Farmers day, to motivate the fish farmers to adopt fish farming as a main or ancillary occupation to double the income by adopting latest scientific techniques and practices in the field of fisheries.

i.The Pradhan Mantri Matsya Sampada Yojana(PMMSY), was launched with a highest ever investment of Rs.20050 crore for the next five years to consolidate the achievement of Blue Revolution and to transform Neeli Kranti to Arth Kranti and to double the income of the fish farmers.

ii.The fund will be utilized to increase productivity and to set up the fish cryobanks across India.

i.The Department of Fisheries, Ministry of Fisheries, Animal Husbandry and Dairying in association with the National Fisheries Development Board hosted a Webinar

ii.Giriraj Singh, Union Minister of Fisheries, Animal Husbandry and Dairying, on account of the National Fish Farmers day announced that the world’s first Fish Cryobank will be established in India

iii.The Fish Cryobank will be established by the National Fisheries Development Board(NFDB) in collaboration with the National Bureau of Fish Genetic Resources (NBFGR) in multiple parts of the nation.

iv.The center will ensure the availability of fish sperms of different species required by the fish farmers at all times .

i.The Cryomilt Technology developed by the NBFGR with the support of NFDB will support in establishing the fish cryobanks.

ii.This will provide a good quality seed -fish sperms in hatcheries at any time, to increase the production and productivity.