As per the latest health survey by the government, India’s health index has shown a notable improvement over the last decade including an improvement in sex ratio at birth and a decline in infant mortality rate.

Infant mortality rate (IMR) is the number of deaths of children with age less than one year per 1000 live births.

As per the survey, the sex ratio at birth (number of females per 1,000 males) improved 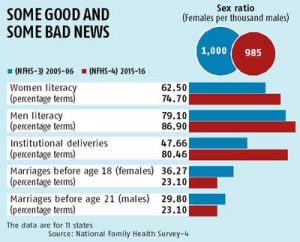 The Total Fertility Rate (TFR) declined to 2.2 children per woman from 2.7 in NFHS-3. This rate shows that the country is moving closer to target level of 2.1.

The report stated that the Children within the age of 12-23 months have been fully immunized (BCG, measles and 3 doses each of polio).