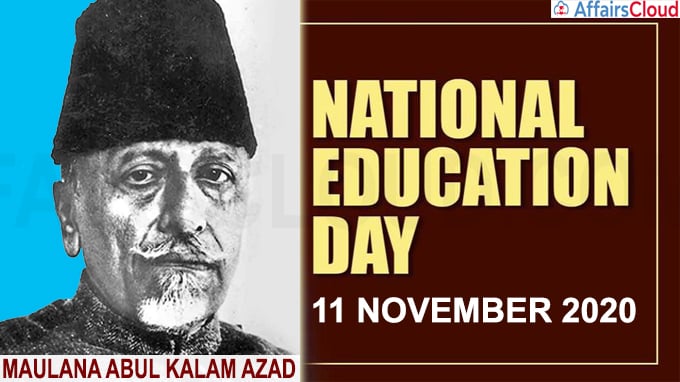 The National Education Day is annually celebrated in India on 11th November to mark the birth anniversary of Maulana Sayyid Abul Kalam Ghulam Muhiyuddin Ahmed bin Khairuddin Al-Hussaini Azad (known as Maulana Abul Kalam Azad), the first education minister of Independent India. The day is observed to spread awareness on the importance of education and literacy.

On 11th September 2008, the Ministry of Human Resource and Development (now Ministry of Education) declared the 11th November as the National Education Day to commemorate the birth anniversary of Maulana Abul Kalam Azad, first Education Minister of India.

i.He was born on 11th November 1888 in Mecca, Saudi Arabia and later relocated to Calcutta, India.He died in the year 1958.

ii.He was a renowned poet, journalist and a freedom fighter.He published a weekly journal “Al-Hilal” which criticised the British Policies, following which he was banned under the Defence of India regulations in 1916.

He was honoured with Bharat Ratna in 1992 for his contribution to the country as both an educationalist and freedom fighter.

Kalam Azad as the Education Minister of India:

i.He served as the Education Minister of India from 1947 to 1958 under the premiership of Jawaharlal Nehru.

ii.During his ministry, first Indian Institution of Technology (IIT) at Kharagpur, Indian Institute of Science or IISc Bangalore,and School of Planning & Architecture and the University Grants Commission were established.

iii.He is also responsible for creating a national-level council for technical education, All India Council for Technical Education(AICTE).