Union Health and Family Welfare Ministry had launched National Deworming Day in schools and anganwadis across the country.The main objective of National Deworming Day is to deworm all children between the ages of 1-19 years at schools and anganwadi centers and to improve their health, nutritional status, cognitive development, and quality of life. 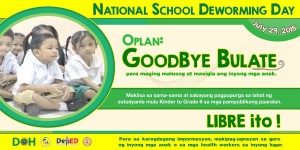