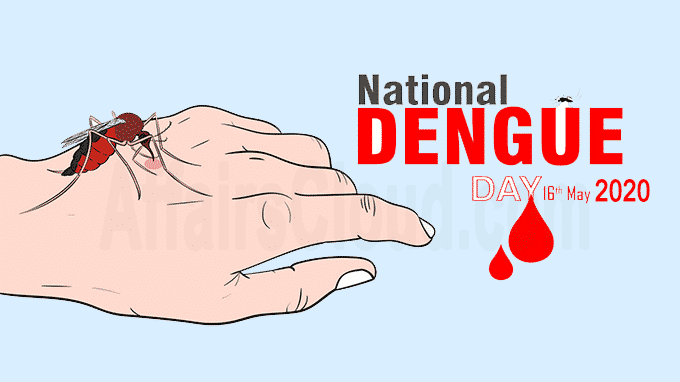 On 16th May Every year India observes National Dengue Day suggested by the Union Health Ministry to create awareness about measures on dengue prevention and to control the spread of the vector-borne disease and preparedness before the transmission season of dengue begins.

The Health Ministry has stated a list of measures to control dengue such as,

It is a viral disease transmitted by the bite of infected AedesAegypti, a type of mosquito.

Very common after the rainy days.

Highly contagious and spreads from one infected person to another through mosquito bites.

It can affect people irrespective of age and gender.

The infected person develops symptoms after 3 to 14 days of infective bite.

The symptoms of dengue overlap with other illnesses that cause fever. The common symptoms are fever, muscle pain, bone pain, joint pain, rash, nausea/vomiting, eye pain and headache.

The symptoms of severe dengue are,