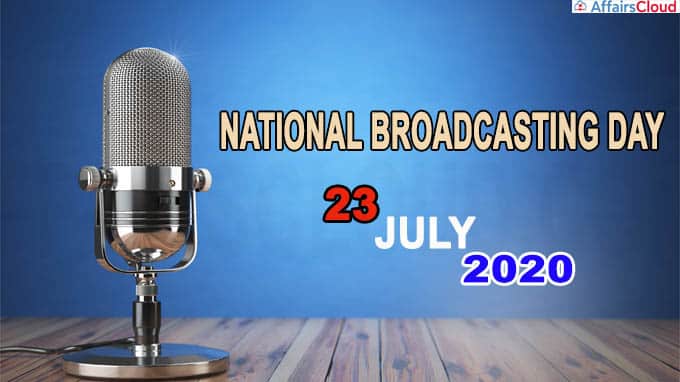 23rd July of every year is observed as the National Broadcasting Day across India to commemorate the first ever radio broadcast aired in India on 23rd July 1927 from the Bombay Station of a private company, the Indian Broadcasting Company.

i.Following the first broadcast in India in June 1923, by the Bombay Radio Club, the Calcutta Radio Club was established.

ii.Under the Department of Industries and Labour, the Indian State Broadcasting Service(ISBS) started the operations on an experimental basis in April 1930.

i.All India Radio(AIR) serves as a medium of mass communication to inform, educate and entertain.

iii.The AIR has a three tier system of broadcasting, these three levels of programmes are National, Regional and Local targeted for different audiences.

iv.All India Radio adopted the name “AKASHVANI” for the National Broadcast in 1956.

v.With 470 broadcasting stations across India, AIR is one of the largest media organisations, which is accessible to the entire population of the country, covering around 92% of the total area.

vi.The programmes of AIR are broadcasted in around 23 languages and 179 dialects.

Prakash Javadekar, Union Minister of Information and Broadcasting, highlighted the radio as the only device which became an easy medium of entertainment across the nation.

About Ministry of Information and Broadcasting(MIB):
Union Minister– Prakash Javadekar