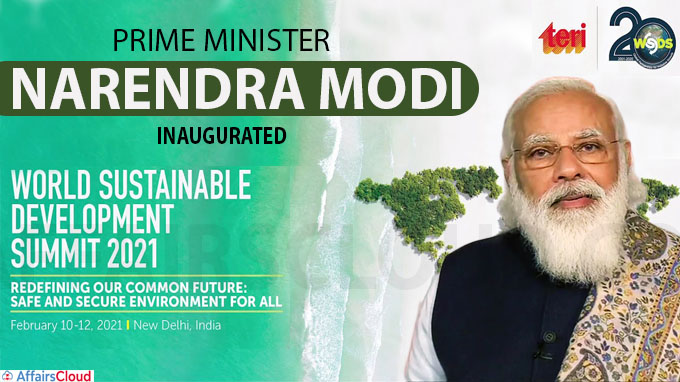 On February 10-12, 2021, the 20th World Sustainable Development Summit (WSDS) 2021 was held on the theme “Redefining our common future: Safe and secure environment for all”. This three days long event was virtually inaugurated by Prime Minister Narendra Modi. The event was also attended by Union Minister Subrahmanyam Jaishankar, Ministry of External Affairs (MEA).

–India is also setting up 450 gigawatts (GW) of renewable energy generating capacity by 2030.

–PM Modi highlighted that the road to fighting climate change is through climate justice.

–The Jal Jeevan Mission (JJM) has connected over 34 million households with tap connections in just about 18 months.

–Through PM Ujjwala Yojana, over 18 million households below the poverty line have access to clean cooking fuel.

–Over 80 million households in need were provided access to clean cooking fuel , which has led to energy saving of about 47 billion kWh per year and reduction of 38 million tonnes of CO2 per year.

–The renewable energy installed capacity in India has grown 162% in the last five years.

The United States (US) Special Presidential Envoy for Climate John Kerry highlighted India as its clean energy transition due to its commitment to address the challenge posed by climate change.

–The focus of the Summit is to bring together a wide number of governments, business leaders, academicians, climate scientists, youth, and the civil society to find long-term solutions for the benefits of the global community.

–The discussion will carry forward to the 26th UN Climate Change Conference of the Parties (COP) in Glasgow, UK to be held in November 2021.

–India is the third largest pollution emitter in the world behind the US and China.

ii.On January 11, 2021,4th edition of One Planet Summit (OPS) 2021 was virtually organized by France, the United Nations (UN) and the World Bank from Paris (France) to prepare negotiations for setting global biodiversity targets in order to protect nature in the next decade. The theme of the summit is “Let’s act together for nature!”.

About The Energy and Resources Institute (TERI)