Merle Haggard, one of the most successful singers in the history of country music died at his farm in California on April 6, He was 79. 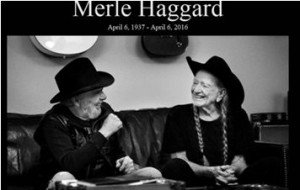