When any entity wants to raise money or we can say want to borrow money, it can issue bonds worth that value. So, now when an Indian company wants to borrow money from a foreign company, there are many methods like FDI, ECB, etc. and one of them is issuing bonds. All methods of borrowing have their own advantages and disadvantages. In the same way are Masala bonds which are named by the International Finance Corporation (IFC), the investment arm of the World Bank. We will read later that how the word masala attached with these bonds.

Now what are these Masala Bonds? 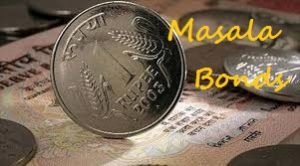 borrowed will be in Indian rupees and not any foreign currency.

Now what is the advantage of using these new masala bonds over the initial methods?

The advantage is that that of the currency risk. Since the Indian entity will return the dollar equivalent of Rs 11 crores, this means that if in a year if there is any fluctuation in the currencies whether large or small, the risk lies with the overseas investor and not the Indian entity.

How the name came?