Negotiable Instruments Act, 1881 is an Act to define and Law relating to negotiable instruments. The act gives the definitions of all the related terms. The act also deals with the offence pertaining to dishonor of cheque on account of insufficiency of funds in the drawer’s account.

A “promissory note” is an instrument in writing that promises to pay a definite sum of money from one party to another party either on demand or at a specified future date. The person who makes the Promissory Note and promises to pay is called the drawer or maker and the person to whom the payment is to be done is called the drawee or payee. So there are two parties in a promissory note.

An example of promissory note: 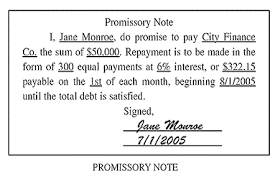 A “bill of exchange” is an instrument in writing that contains an order to pay a definite sum of money from one party to another party either on demand or at a specified future date with an intermediary to pay the sum. So there are three parties in a bill of exchange. But all may not be distinct persons as a drawer may pay on himself payable to his own order.

An example of bill of exchange: 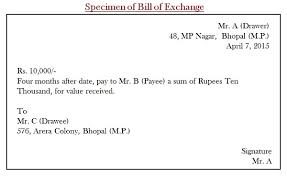 A “cheque” is bill of exchange drawn on a specified banker and not expressed to be payable otherwise than on demand and cheque also includes the electronic image of a truncated cheque and a cheque in the electronic form.

An example of cheque:

The government has notified the Negotiable Instruments (Amendment) Bill, 2015 which allows filing cheque bounce cases in a court at a place where the cheque was presented for clearance and not the place of issue so that there is a fast prosecution of offenders.