Cheque and Demand Drafts both are used for the purpose of payments. Since it is not always possible to give the money in cash to another person or party, they are popular for doing the payments. Since the banks are involved in between the payment process, the currency paid is considered to be authentic. 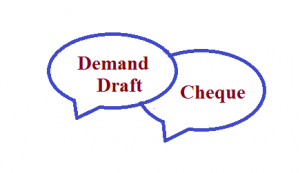 A cheque is a negotiable instrument drawn on a specified banker and not expressed to be payable otherwise than on demand and cheque also includes the electronic image of a truncated cheque and a cheque in the electronic form.

An example of cheque:

Also known as DD, it is kind of a pre-paid negotiable instrument that is used to direct payments from one bank to another bank or one of its own branches to pay a certain sum to the specified party.

An example of DD:

Both can be compared in many ways: