On April 30, 2020 Chak-Hao, the black rice of Manipur, the terracotta work of Gorakhpur & Kovilpatti kadalai-mittai has been granted with the Geographical Indication(GI) tag. 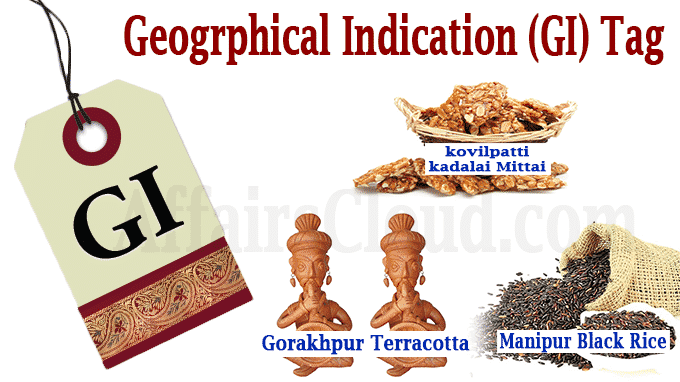 i.The black rice is glutinous rice cultivated in Manipur over centuries, is characterised by its special aroma& is consumed mainly after being cooked like rice or kheer.

ii.It has a deep black colour and when cooked, it usually turns purple. It’s dark purple colour is primarily a product of its anthocyanin content which is considered as boosting up the antioxidants level, apart from this it also has vitamins, minerals, fibre, proteins, among others.

iii.It is a bit heavier as compared to other varieties of rice but its natural flavour is rich and sweet & is used as traditional medicine & takes the longest cooking time of 40-45 minutes due to the presence of a fibrous bran layer and higher crude fibre content.

i.It is a centuries-old traditional art form, the work is done with bare hands including the ornamentation & natural color which stays fast for a long time. There are more than 1,000 varieties of terracotta work designed by the local craftsmen

ii.Some of the major products of craftsmanship include the Hauda elephants, Mahawatdar horse among others.

i.It is a peanut candy manufactured in Kovilpatti and adjacent towns and villages in Thoothukudi district, the southern part of Tamil Nadu.

ii.It is produced by using groundnuts and vellam (jaggery) and water from the river Thamirabarani which enhances the taste naturally. It is sold as single rectangular chunks, or rather cuboids, sealed in packets.

iii.For decades it was traditionally prepared during village festivals using palm jaggery and groundnuts from nearby districts. The switch to sugarcane jaggery happened in the pre-independence era, around the 1940s