According to the report, “The burden of child and maternal malnutrition and trends in its indicators in the states of India: the Global Burden of Disease Study 1990–2017” published in a monthly journal of the Lancet Child & Adolescent Health by India State-Level Disease Burden Initiative Malnutrition Collaborators , two-thirds of the children below 5 years deaths in 2017 (706,000 out of 1.04 million) in India are still attributable to malnutrition. 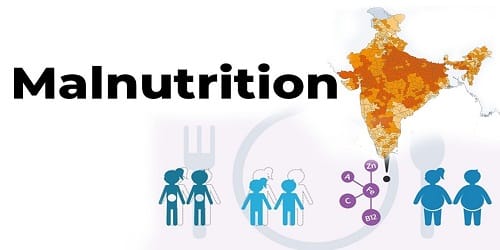 Key points:
i. However, the deaths caused by malnutrition have shown a much smaller decrease to 68.2% in 2017 from 70.4% in 1991.
ii. The report found a difference in malnutrition-related disability-adjusted life year (DALY) rate of up to seven times in different states. The top states witnessed death rates due to malnutrition are Rajasthan, Uttar Pradesh, Bihar and Assam, followed by Madhya Pradesh, Chhattisgarh, Odisha, Nagaland, and Tripura.
iii. The highest proportion of malnutrition DALYs in children below 5 years in India in 2017 was from low birth weight and short gestation followed by child growth failure.
iv. The joint initiative of  the India State-Level Disease Burden Initiative undertaken by Indian Council of Medical Research (ICMR), Public Health Foundation of India, and Institute for Health Metrics and Evaluation in association with the Ministry of Health and Family Welfare, Government of India (GoI) along with experts and stakeholders from over 100 Indian institutions, involving many leading health scientists and policy makers from India.

Proposition of death in under five attributable to malnutrition:

About malnutrition:
It is a condition that results from eating a diet in which one or more nutrients are either not enough or are too much such that the diet causes health problems. It may involve calories, protein, carbohydrates, vitamins or minerals. Not enough nutrients is called undernutrition or undernourishment while too much is called overnutrition.
AffairsCloud Recommends Oliveboard Mock Test