On 19th April 2020, the President of Weightlifting Federation of India (WFI) Shadev Yadav confirmed that Mirabai Chanu and Jeremy Lalrinnunga have been qualified to participate in the Tokyo 2020 Olympic Games due to their current International rank. 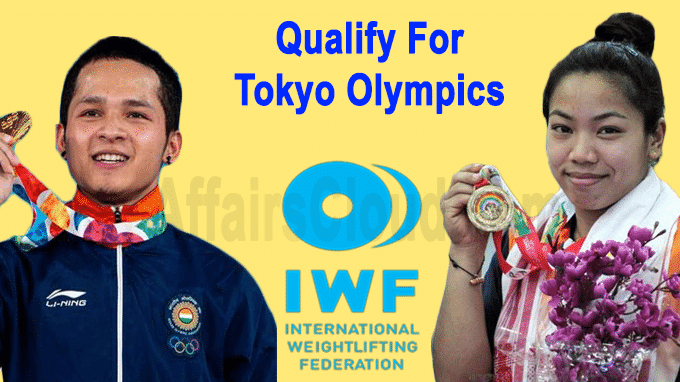 i.In the Olympic qualification process, for each weight class 14 lifters will be qualified with a maximum of one lifter per country per category apart from the top 8 lifters in the IWF ranking list and the highest rank lifter in each continent will also qualify.

ii.Jeremy placed 22nd in the 67kg category in the International Weightlifting Federation (IWF) ranking list and he is the top rank lifer in Asia and Mirabai ranked 4th in the 49kg category.

iii.In the video conference of Executive board of IWF on 17-18 March recommended that to close the qualification process since the five continental championships were cancelled due to COVID-19 pandemic and the selections were made with the current world rankings.

iv.Mirabai took part in five events out of six mandated in the qualification rules and since she is in the 3rd spot in the world rankings she automatically qualifies to the Olympic Games.

The international governing body of the Olympic Weightlifting, a permanent non-profit organization composed of 192 affiliated National Federations worldwide. The IWF is the world controlling body for weightlifting