An Innovative Initiative To Digitalise India

Lucky Grahak Yojana is an initiative to develop a corrupt free digital india. It is a huge step to completely bring out a cashless India!

Magical! The governmental steps towards cashless economy are rapidly evolving a DIGITAL INDIA. One such step towards cashless economy is Lucky Grahak Yojana. After demonetization of high value currency notes, the Government is literally pushing rather forcing its citizens to embrace digital transactions. However, there still persist gaps that need to be filled in to completely digitalize India and make it corruption free.

What is Lucky Grahak Yojana?

Lucky Grahak Yojana is a LOTTERY scheme. People who use digital transactions will become eligible for daily and weekly lucky draws and prizes. Thousands of people would get rewards through this scheme every day. Government of India has allocated an amount of Rs 340 crores for this scheme of Lucky Grahak Yojana.

With the motto of “GO DIGITAL, GET BENEFITS”, Prime Minister Narendra Modi has launched two schemes

Both the schemes were together launched on the Christmas Eve, December 25 2016 by Prime Minister Narendra Modi. The first draw was made by the Union Minister for Electronics and Information Technology Ravi Shankar Prasad and the union Finance Minister Arun Jaitley. 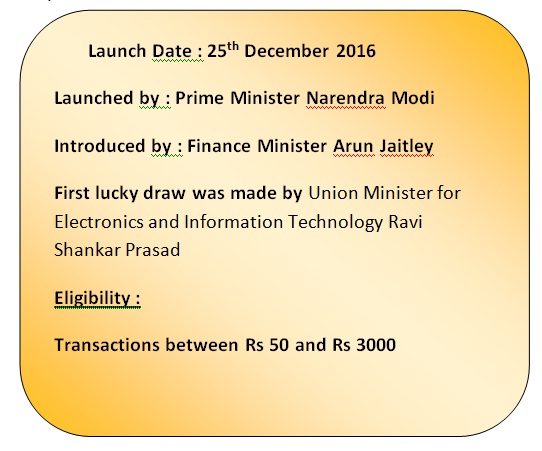 Since then the winners will be selected everyday and the amount will be credited to their bank accounts directly within the next 24 hours. And the schemes are to be run till April 14 2017.

Lucky Grahak Yojana is applicable only for consumers. Especially, it is applicable to the consumers whose transactions are worth from Rs 50 to Rs 3, 000. This is a great step to focus the poor and middle class people.

Lucky Grahak Yojana is implemented by NPCI – National Payment Corporation of India. It is a 100 day programme that started on December 25, 2016 and to end on April 14, 2017.

Types of transactions to be considered under LGY

The following modes of transactions are eligible under Lucky Grahak Yojana 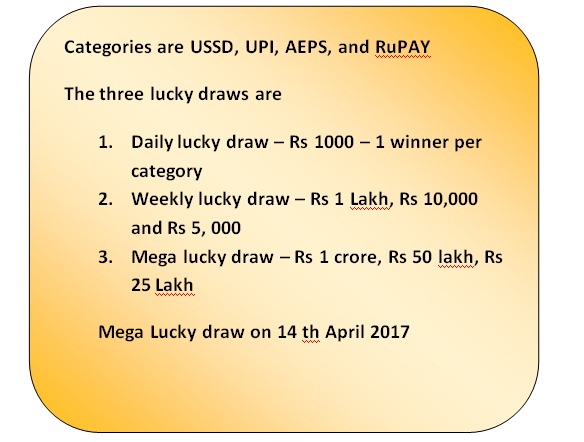 The following transactions are not to be considered under the scheme

The digital and card payments of more than Rs 3000 are not eligible for the lucky draw. Also, the more you use digital payments, the more you would be eligible to get a prize. So it is wise to split the bill to take part in the scheme!

Participants of the scheme

Working of the scheme

NPCI – National Payment Corporation of India Ltd overlooks the transactions of the Lucky Grahak Yojana. NPCI currently manages all the transactions that is happening through USSD, UPI, IMPS, RuPay card, and UPI.

Government has opened a website exclusively for Lucky Grahak Yojana from where one can know if he / she is the inner of the day. A lucky draw is being conducted every day throughout India through Digi Dhan Melas in one city or another.

In the website, one can know if he has won by verifying his mobile number through OTP. However, only the winner can know the result. No names will be provided as the entire process is being conducted with Ids and account numbers.

UPI is Unified Payment Interface. Lucky Grahak Yojana is one of the prime steps to accomplish digital goals like UPI. UPI has many benefits. IT is considered as a revolutionary innovation as it is the most advanced methods among all the digital payments.

NEFT charge a minimum of Rs 2.50 per transaction whereas IMPS charges Rs 5. But with UPI it is just Rs 0.50 per transaction. Also it does not demand any details like IFSC code, MICR code, etc. Also it works 24 / 7, so the funds get transferred instantly.

National Institution for Transforming India has introduced many schemes to digitalise India. One such scheme to promote Digital india is Lucky Grahak Yojana. The cash prize for the Yojana is being paid by the NITI Aayog. The CEO of the team is Mr Amitabh Kant.