Telangana IT Minister K T Rama Rao (KTR) was awarded with the Global Champion of Digital Literacy Award by Certiport.

Digital literacy is the knowledge, skills, and behaviors used in a broad range of digital devices such as smart phones, tablets, laptops and desktop PCs, all of which are seen as network rather than computing devices. Digital literacy initially focused on digital skills and stand-alone computers, but the focus has moved from stand-alone to network devices. 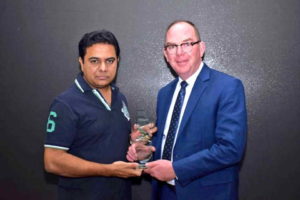 Certiport found the work done by Rao deserving of a Global Champion of Digital Literacy Award.