The Plenary meeting of the Kimberley Process Certification Scheme (KPCS) was hosted by India, the founding member and 2019 KP chair, in New Delhi from November 18-22, 2019. KP is a joint initiative involving govt, international diamond industry and civil society to reduce or control flow of conflict diamonds. The meeting was inaugurated by, Dr. Anup Wadhawan, Secretary of Commerce industry. 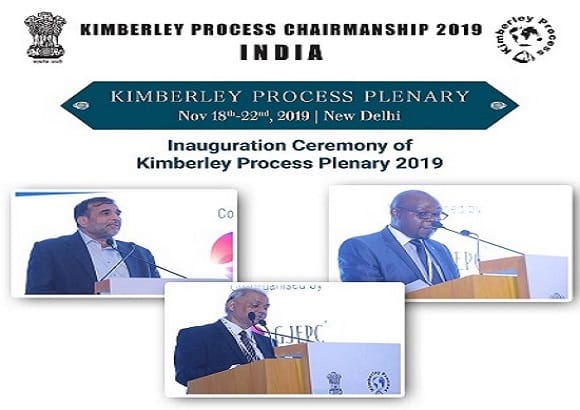 i.India’s contribution to KP: India has been involved in developing KP (Kimberley Process) as an important protocol in diamond trade, ensuring 99.8% of diamonds to be conflict free. Some of India’s efforts in this regard involve leadership access by the country to address the issue of differentiation between natural diamonds and lab grown diamonds

ii.Important events during KPCS: 3 special forums were held. They were on financial inclusion and women empowerment, and on the diamond industry.

iv.Next chair 2020: India on the closing session of the KPCS handed over the KP chair for the year 2020 to the Russian federation. It is also to be noted that India was the previous chair of the KP in 2008.

v.The Department of Commerce is the nodal agency, while the Gem and Jewellery Export Promotion Council (GJEPC) is the KPCS import and export authority of India. GJEPC issues KP certificates.

vii.Conflict diamonds: It means diamonds which are used by rebel movements to finance conflicts aimed at undermining legitimate govts. It is also described in the United Nations Security Council (UNSC) resolutions.

i.Illegal diamonds were sold by certain rebel movements in Africa in 1998 to fund their wars against govts. To Stop such illegal usage of diamonds, various organisations from around the world including United Nations(UN) drafted a plan in 2002 to form the Kimberly process.