On August 27, 2019 “Child well-being index” was launched to assess and track children’s well-being. Prepared by NGOs(Non-Governmental Organisation) World Vision India andInstitute for Financial Management and Research-Leveraging Evidence for Access and Development (IFMR LEAD), the index was topped by Kerala (0.76), followed by Tamil Nadu (0.67) and Himachal Pradesh (0.67) bagging the top three slots in the index. Among Union Territories(UT), Puducherry topped the spot. 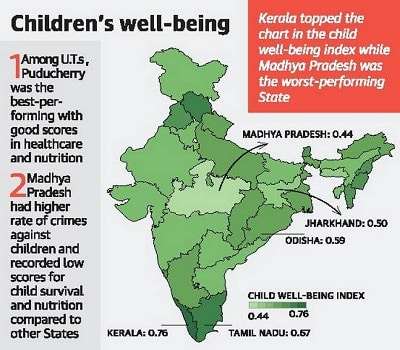 Key points
i. Meghalaya (0.53), Jharkhand (0.50) and Madhya Pradesh (0.44) were the poor performers and were ranked at the bottom. Among UTs Dadra and Nagar Haveli was ranked at the bottom.
ii. The report was based on 3 key dimensional factors derived from 24 indicators. The 3 factors are healthy individual development, positive relationships and protective contexts.
iii. The report states that 40% of the country’s population is made of children between the ages of 1 and 18.

Reports:
i. Kerala: Kerala topped the spot due to its high level of performance in health, nutrition and education facilities. Also, it performed better in terms of clean drinking water and sanitation facilities in addressing malnutrition.
ii. Jharkhand: Due to poor performance in terms of child survival, nutrition, water and sanitation, basic education Jharkhand ranked at the bottom resulting in school dropouts and is in need to focus on improvement.
iii. Madhya pradesh(MP): There are more crimes against children and also juvenile crimes in the state. More children live in poor families. MP also ranked low in child survival rate and nutrition.