The 45th Edition of the World Skills International Competition for the year 2019, a biennial event, was held at Kazan Expo International Exhibition Centre, Kazan, Russia from August 22- 27, 2019. It was inaugurated by the Russian Prime Minister Dmitry Medvedev. This global-level skills competition was held for the first time in Russia. It was a grand event in the arena of vocational skills. 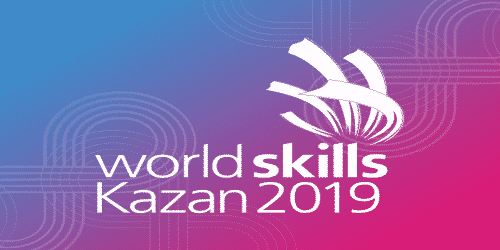 i. Classification: Skills are classified into 6 sectors: Manufacturing and Engineering Technology, Information and Communication Technology, Construction and Building Technology, Transportation and Logistics, Creative Arts and Fashion, and Social and Personal Services.
ii. Organizers: WorldSkills International, WorldSkills Russia, and the Directorate for Sports and Social Projects (Russia) were the organizers of the Competition.
iii. Participants: More than 1,350 competitors participated from 63 countries across 56 skills and trades.
iv. Medal tally: China topped the list with 16 Gold, 14 Silver, 5 Bronze & 17 Medallions of Excellence, followed by Russia and Korea.

i. S Aswatha Narayana who won a Gold medal in Water Technology was also awarded as ‘Best of Nation’ amongst the Indian competitors. He was trained by Rajat Kumar Samantaray, Professor, CV Raman Institute, Bhubaneswar, Odisha.
ii. Shweta Ratanpura who won the Bronze medal in Graphic Designing earned the distinction of being the only female candidate to win a medal for India at WorldSkills Kazan 2019. She was trained by Narayanan Sathish, Founder, Design Media, Pune.
iii. Pranav Nutalapati who won Silver in Web Technologies was trained by Ruchi Pareek, Technical Director, Smalt & Beryl. Sanjoy Pramanik who won Bronze in Jewellery was trained by Anupam Karmakar, Creative Head, Vummidi Bangaru Jewellers.

About WorldSkills India
WorldSkills India is an initiative of the National Skill Development Corporation (NSDC) under the aegis of Ministry of Skill Development and Entrepreneurship (MSDE), which has been leading India’s participation at WorldSkills International competitions since 2011. This was done to create an aspiration around the pursuit of skills training in India and benchmark the skillsets of our youth against their counterparts in other parts of the world.

About WorldSkills Competitions
WorldSkills hosts the world skills competition which attracts more than 1,300 Competitors from more than 60 countries. At this event, young people from all corners of the globe gather together for the chance to win a prestigious medal in their chosen skill. There are competitions in 56 skills across a wide range of industries — from joinery to floristry; hairdressing to electronics; and autobody repair to bakery. The Competitors represent the best of their peers and are selected from skills competitions that are held in WorldSkills Member countries and regions.