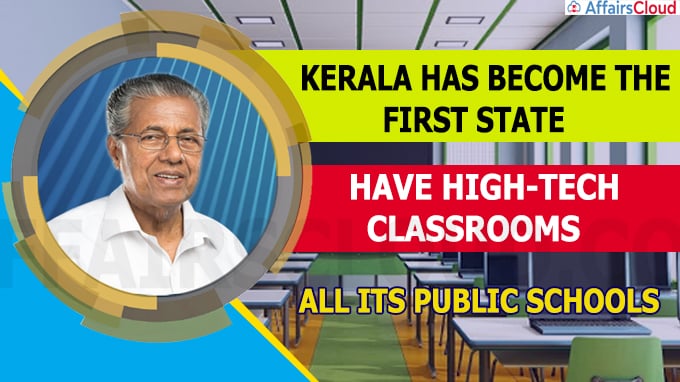 The state of Kerala has become the First State in India to make the public education sector completely digital.

It has been implemented at a cost of INR 42.36 Crores, out of which KIIFB has contributed INR 34.75 crores.

iii.The State of Kerala has 45, 000 high-tech classrooms across 4, 752 schools in Kerala and 1, 83, 440 teachers have gone through expert Information and Communication Technology (ICT) training.

iv.It will include components like laptops, webcams, Projector, DSLR Camera, Television and other digital equipment.

iv.All the classrooms have been converted into high-tech classrooms and have been implemented as part of the Public Education Rejuvenation Mission.

The digitisation initiative was launched in January, 2018.

ii.On August 15, 2020, the first ever Kerala State Dragonfly Festival 2020 aka “Thumbimahotsavam 2020” was launched by the World Wide Fund for Nature (WWF)-India State unit in collaboration with Society for Odonate Studies (SOS) and Thumbipuranam through a virtual ceremony from Kerala.