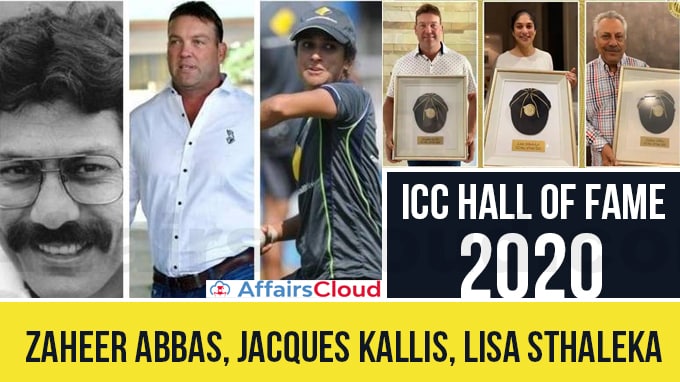 On 23rd August, 2020 Former players Jacques Kallis (South Africa), Lisa Caprini Sthalekar(Australia) and Syed Zaheer Abbas Kirmani(Pakistan) were inducted into the International Cricket Council’s (ICC) Hall of Fame of the class of 2020 in a virtual ceremony.

ICC Cricket Hall of Fame recognizes the achievements of the legends of the game from cricket’s long and illustrious history.

i.Kallis (1995-2014) is the Fourth South African player to be inducted into the Hall of Fame. The All-rounder is the only player to have scored 10,000 runs and taken 250 wickets in both Tests and One Day Internationals(ODIs). He is South Africa’s highest run-getter in Tests and ODIs.

iii.Zaheer Abbas (1969-1985) is the sixth player from Pakistan to be inducted into the Hall of Fame. The Former Batsman & Captain played was the first player to score 3 successive hundred in ODIs, and earned the moniker ‘Asian Bradman’ for his run scoring abilities.

A total of 93 players have been inducted into the Hall of Fame, starting from 2009.

i.Any Retired Player, who last played an international match before 5 years is eligible for the Hall of Fame.

ii.On May 18, 2020, ICC Cricket Committee, chaired by former Indian cricketer & commentator, Anil Kumble recommended a ban on the use of saliva to make the ball shine due to the Covid-19 (Coronavirus) pandemic. However, the committee considered ball-shining as safe from the use of sweat.