Takaaki Kajita of Japan and Arthur McDonald of Canada won the Nobel Prize in physics for their work on neutrinos.Neutrinos are the second most abundant subatomic particles in the universe, after photons, which carry light. 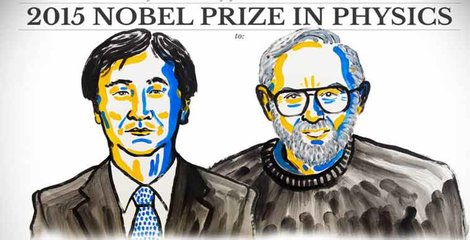 Discovery : Neutrino oscillations which shows that neutrinos have mass..

Nobel Prize for physics was awarded to Dr. Kajita and Dr. McDonald for showing that the neutrinos didn’t disappear at all but merely changed identities.

Takaaki Kajita discovered that neutrinos from the atmosphere switch between two identities on their way to the Japan’s Super-Kamiokande detector.While working at the Sudbury Neutrino Observatory in Canada, McDonald found that neutrinos coming from the sun were not disappearing on their way to Earth. Instead they were captured with a different identity .

Arthur McDonald is a professor emeritus at Queen’s University in Kingston, Canada.