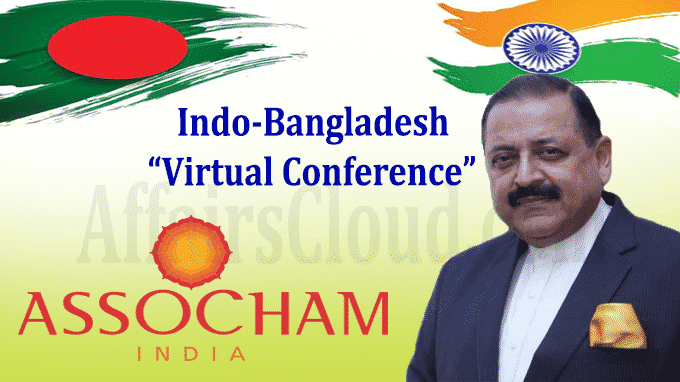 On May 11, 2020 Union Development of North Eastern Region(DoNER) Minister of State Independent Charge(I/C) Jitendra Singh addresses the Indo-Bangladesh ‘Virtual Conference’ organised by Associated Chambers of Commerce and Industry of India(ASSOCHAM)

Statements made by Jitendra Singh

i.New paradigms will emerge post-COVID with a possibility for new development in economy, trade, scientific research and several other diverse areas.

ii.Over the past 6 years, the North Eastern region has experienced many shortcomings in the past, as it has for the 1st time received equal attention at par with the other regions of the country.

iii.This has inculcated confidence among the people & raised the capacity to engage with other parts of India as well as the countries across the eastern borders, at different levels.

iv.As for Bangladesh, the Indo-Bangladesh treaty(for exchange of enclaves)  passed under the leadership of Prime Minister Narendra Modi has cleared the decks for ease of business, ease of movement and ease of commuting, which was earlier a difficult task.

vi.In the emerging scenario, Bamboo from the North East will be an important vehicle of trade not only for India but also for the entire subcontinent, particularly the Eastern countries like Bangladesh.

vii.Mentioned several items like coal, ginger etc. for export and cement, plastic, etc for import, which would be promoted for popular trade between the two countries.

viii.Called upon trade and business organisations like ASSOCHAM to come forward and ease PPP (Public Private Participation) model for promotion of new industries and business units with mutual benefit.

ix.Although the government can play a permissive role trade and industry bodies can come onward to fill the gap of resources and capital.