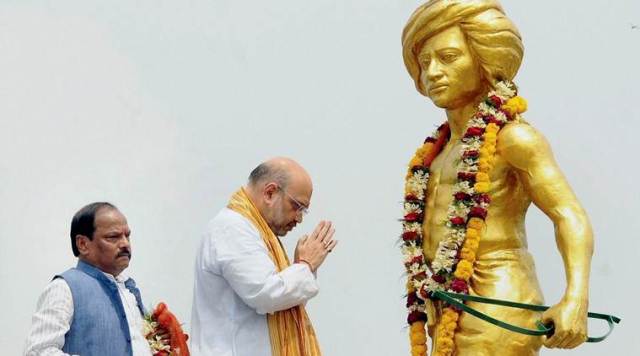 i. villages of many tribal freedom fighters will be developed and their habitants will be provided basic amenities. Amit shah gave away gas connections, solar lamps to some of the beneficiaries.

ii.136 pucca houses will be built. Development in this area was sluggish due to left wing extremism.

i) He is known for his leadership in munda rebellion which happened at the end of 19th century .The rebellion is called ulgulan meaning ‘Great Tumult’.

ii)The rebellion aimed to drive away the British and establish Munda Raj or Munda rule in this region. It started in the year 1895 due to the policies of British that intervened in tribal politics and religious matters.

ii) Birsa Munda was a freedom fighter, religious leader, and tribal hero who belonged to the Munda tribe from Chhotanagpur area

iv)Birsa Munda was a master at Guerilla Warfare techniques. He launched various surprise attacks in which many police officials were killed

v)The Britishers were able to arrest Birsa Munda on Mar 3, 1900. He was sentenced to death but he died beforehand inside the jail due to cholera.