The Indian Space Research Organisation – ISRO successfully placed INSAT-3DR, an advanced weather satellite in the GSLV-F05 rocket into the intended orbit from the Satish Dhawan Space Centre at Sriharikota in Andhra Pradesh. 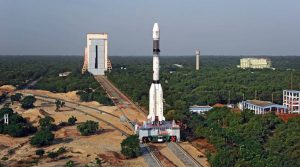 The 2,211-kg rocket has three stages, and the last stage is fitted with the cryogenic engine which provides a thrust 1.5 times greater than in vehicles propelled by conventional liquid rocket engines.