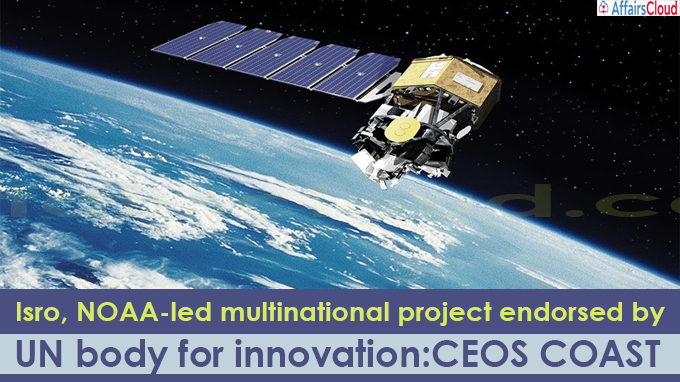 A multinational project, Committee on Earth Observation Satellites—Coastal Observations, Applications, Services, and Tools (CEOS COAST), which is co-led by the Indian Space Research Organisation (ISRO) and National Oceanic and Atmospheric Administration (NOAA), United States, was endorsed by United Nations Educational, Scientific and Cultural Organization’s (UNESCO) Intergovernmental Oceanographic Commission (IOC) for its use of innovative technology, and for fostering trust and collaboration among scientists.

On World Oceans Day (June 8, 2021), CEOS COAST was endorsed by UNESCO’s IOC as one of 66 Actions selected as part of the United Nation’s (UN) ‘Decade of Ocean Science for Sustainable Development 2021 to 2030 (Ocean Decade)’.

ii.The project aims to improve the acuracy of coastal data based on satellite and land-based observations, it is Co-Chaired by Dr Paul DiGiacomo (NOAA) and Dr Raj Kumar (ISRO).

v.It has been working with stakeholders in industries such as agriculture, construction, and commercial/recreational fishing to support the people and government for all forms of decision making.

About ‘the Ocean Decade’:

i.On 5 December 2017, the UN declared Ocean Decade to support countries’ efforts to reverse the cycle of decline in ocean health and create improved conditions for sustainable development of the Ocean.

ii.It aims to bring together governments, industry, academics, NGOs, and other stakeholders to study the oceans and develop conservation solutions.

ii.SDG-14 – Life Below Water -Conserve and sustainably use the oceans, seas and marine resources for sustainable development.

ISRO has partnered with the Indian Institute of Space Science and Technology (IIST) to undertake Joint Research Activities.  The partnership model will be similar to the JPL-Caltech model followed by US Space Agency National Aeronautics and Space Administration (NASA).