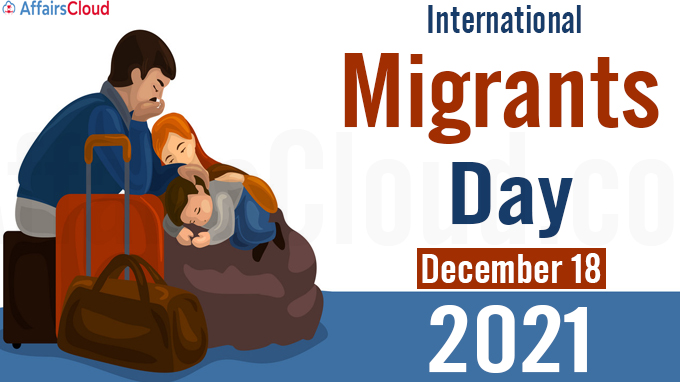 The United Nations(UN)’s International Migrants Day is annually observed across the world on December 18th to increase the interest of the international community on effective and full protection of the human rights of the migrants.

The day also aims to ensure that migrants’ rights are not violated and are protected equally.

The theme of International Migrants Day 2021 is “Harnessing The Potential Of Human Mobility”.

The United Nations General Assembly(UNGA) adopted the resolution A/RES/55/93 on 4th December 2000 and proclaimed the 18th December of every year as the International Migrants Day.

The 18th December marks the anniversary of the 1990 adoption by UNGA of the International Convention on the Protection of the Rights of All Migrant Workers and Members of Their Families (A/RES/45/158).

i.The IOM was established as the “Provisional Intergovernmental Committee for the Movement of Migrants from Europe(PICMME) in 1951.

iii.In 1989 the organisation was again renamed as International Organization for Migration (IOM).

iv.In September 2016, the IOM joined the UN system during the UNGA high-level summit to address large movements of refugees and migrants.

According to the UN Migration Agency, IOM, a Migrant is defined as a person who is moving or has moved across an international border or within a State away from his/her habitual place of residence, regardless of the person’s legal status; whether the movement is voluntary or involuntary; the causes for the movement or the length of the stay.

i.According to the IOM World Migration Report 2020, as of June 2019, the number of international migrants was estimated to be almost 272 million globally, 51 million more than in 2010.

ii.According to UNHCR, the number of globally forcibly displaced people worldwide was 79.5 million at the end of 2019.

To strengthen the health workforce and support the provision of quality people-centred and culturally sensitive health services to migrants and refugees.

About International Organization for Migration (IOM):