The International Day of United Nations Peacekeepers has been observed on 29 May.

The day was established to honour the memory of the UN peacekeepers who have lost their lives in the cause of peace. 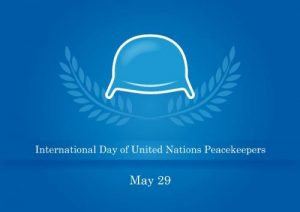 The two laid down their lives while serving in UN peacekeeping operations last year.

India’s Permanent Representative to the UN Ambassador Syed Akbaruddin received the medal on behalf of the fallen Indian peacekeepers at the solemn ceremony.