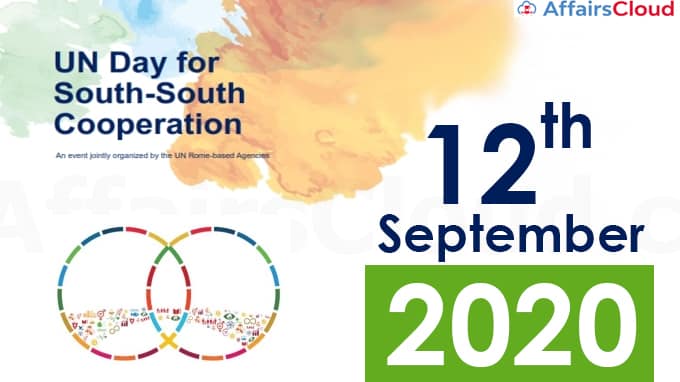 United Nations Day for South-South Cooperation will host a virtual high-level event 2 days prior to the observance and ahead of the celebration of the 75th anniversary of the United Nations.

i.The United Nations General Assembly(UNGA) adopted the resolution A/RES/58/220 on 23rd December 2003 declaring 19th December, the date when the UNGA endorsed the “Buenos Aires Plan of Action(BAPA) for Promoting and Implementing Technical Cooperation Among the Developing Countries” as the United Nations Day of South-South Cooperation.

ii.Later in 2011, The UNGA moved the date to 12th September, the date on which the “Buenos Aires Plan of Action for Promoting and Implementing Technical Cooperation Among the Developing Countries” was adopted by the UNGA in 1978.

ii.This fund is sponsored by the Government of India and implemented in collaboration with the UN.

iii.UNOSSC, the coordinating partner, contributes the resources and expands its partnership for the development in the Global South.

i.South South Cooperation is the exchange of development solutions between and among the global south.

ii.This is a framework for cooperation among the south countries in the form of knowledge sharing, capitalizing on experiences and good practices, policies, technologies or resources in political, economic, social, cultural, environmental and technical domains.

i.United Nations Day for South-South Cooperation hosted a virtual high-level event “Pathways toward the SDGs through South-South solidarity beyond COVID-19” on 10th September 2020.

ii.“Good Practices in South-South and Triangular Cooperation for Sustainable Development – Volume 3” featuring around 200 good practices presented by 35 member states, 23 UN entities and other partners was launched during the event.

i.UNOSSC organised a side event for the launch of South-South in Action on 11th September 2020.

ii.China-Africa Development Fund (CADFund) is one of the important initiatives of the Forum on China-Africa Cooperation.

In September 2018, the CADFund and the United Nations Office for South-South Cooperation (UNOSSC) signed a memorandum of understanding in which the two organizations committed to jointly promoting cooperation in poverty reduction, capacity development, joint research and project incubation in Africa.

The global knowledge sharing and partnership platform “South-South Galaxy” which was launched in 2020 offers webinars adapted to the COVID-19 situation and COVID-19 response of UNOSSC.