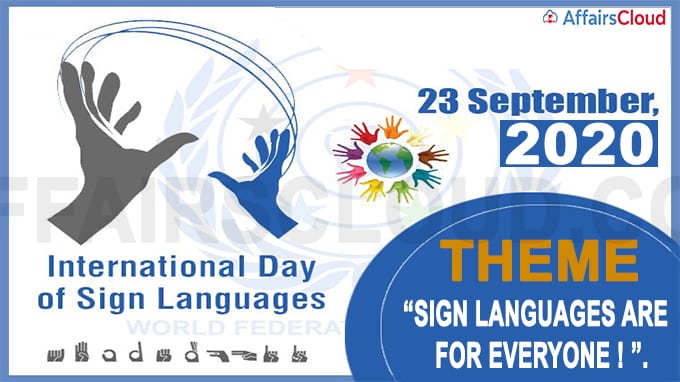 United Nations’ (UN) celebrates the International Day of Sign Languages (IDSL) annually on September 23. It is observed to support and protect the linguistic identity and cultural diversity of all deaf people and other sign language users.The year 2020 marks the 3rd edition.

ii.The day corresponds with International Week of the Deaf, which is taking place from 21st September – 27th September, 2020.

i.The IDSL was first celebrated in 2018 as part of the International Week of the Deaf.

ii.The proposal for IDSL came from World Federation of the Deaf (WFD), which is a federation of 135 national associations of deaf people and represents approximately 70 million deaf people’s human rights.

iii.The choice of the date commemorates the date on which WFD was established in 1951.

i.Sign Language is a form of visual language, it uses hand gestures and body language to convey meaning.

ii.According to WFD, there are 72 million deaf people worldwide out of which 80% live in developing countries. They use more than 300 different sign languages.

ii.The Dictionary includes 6, 000 words and was developed by ISLRTC under the Department of Empowerment of Persons with Disabilities, Ministry of Social Justice & Empowerment.

About World Federation of the Deaf (WFD):