On September 23, 2019, The second International Day of Sign Languages (IDSL) was observed throughout the world to raise awareness of the importance of sign language in the full realization of the human rights of people who are deaf. The theme of this day for 2019 is “Sign Language Rights for All”. The day corresponds with International Week of the Deaf, which also took place annually from 24th -30th  September. 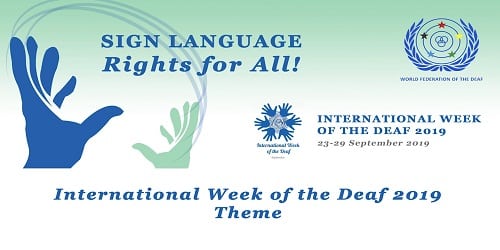 Key points:
i. In 2017, United Nations General Assembly (UNGA) has declared 23 September as the International Day of Sign Languages. The 1st International Day of Sign Languages was celebrated on September 23, 2018.
ii. The day, September 23 was chosen as it commemorates the date when the WFD (World Federation of the Deaf (WFD), a federation of 135 national associations of deaf people, representing approximately 70 million deaf people’s human rights worldwide) was formed in 1951.
iii. As per the report of World Federation of the Deaf (WFD), there are about 72 million deaf people present worldwide and over 80 % live in developing countries. As a whole, they are known to use more than 300 different sign languages. The Convention on the Rights of Persons with Disabilities, an international human rights treaty of the United Nations(UN), recognises and promotes the use of sign languages.
iv. The sign languages : These are full-fledged natural languages, just structurally different from spoken languages.

Indian Sign Language Research and Training Centre celebrates  ‘Sign Language Day’
An autonomous body under the Department of Empowerment of Persons with Disabilities, Ministry of Social Justice and Empowerment,  Indian Sign Language Research and Training Centre (ISLRTC) has celebrated Sign Language Day. Union Minister for Social Justice and Empowerment Shri Thaawarchand Gehlot was the Chief Guest of the event held in New Delhi.
Key points:
i. Thaawarchand Gehlot has applauded ISLRTC for bringing out a Dictionary of 6000 Sign Language words and hoped that 4000 more new Sign Words will soon be added in to it by 2020. He also distributed the Prizes to Winners of ‘2nd Sign Language Competition, 2019 . For this, entries on jokes, stories and essays in Indian Sign Language were invited from children with hearing disability studying in Delhi-NCR(National Capital Region). They showcased their creative skills and knowledge in their submissions.