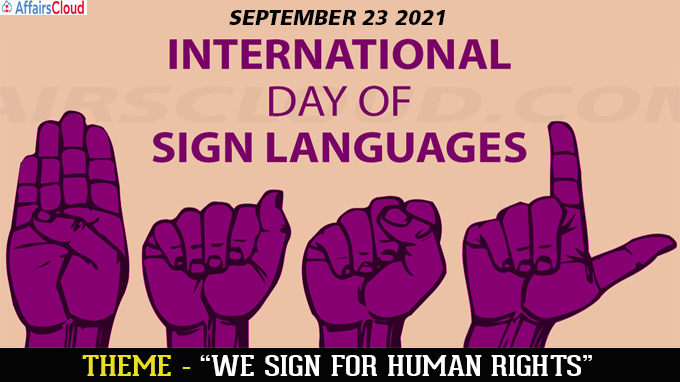 The United Nations(UN)’s International Day of Sign Languages(IDSL) is annually observed across the globe on September 23rd to create awareness about the importance of sign language in the full realization of the human rights of people who are deaf.

The theme of International Day of Sign Languages 2021, declared by WFD, is “We Sign For Human Rights”.

i.The observance of the International Day of Sign Languages(IDSL) was proposed by the World Federation of the Deaf(WFD), a federation of 135 national associations of deaf people.

ii.The United Nations General Assembly(UNGA) adopted the resolution A/RES/72/161 on 19th December 2017 and proclaimed the 23rd September of every year as the International Day of Sign Languages.

iii.The resolution was sponsored by the Permanent Mission of Antigua and Barbuda and co-sponsored by 97 UN Member States.

iv.The first IDSL was observed on 23rd September 2018, as a part of the International Week of the Deaf People(IWDP).

September 23rd was chosen to commemorate the establishment of the World Federation of the Deaf(WFD) on 23rd September 1951.

The International Week of Deaf People (IWDP) is annually observed across the globe in the last full week of September to recognise that deaf people have their own communities, own cultures, own languages, and sign languages that unite all.

The IWDP is an initiative of the WFD launched in 1958 in Rome, Italy.

The theme of the International Week of the Deaf People (IWDP) 2021 is “Celebrating Thriving Deaf Communities”.

i.Sign Language is the communication tool for many deaf and hard-of-hearing people.

ii.Sign language has been developing since 1950, there is no single or common sign language used around the world.

i.Indian Sign Language (ISL) is used among the deaf community in India.

ii.In 2011, The Ministry of Social Justice and Empowerment approved the establishment of the Indian Sign Language Research and Training Center (ISLRTC), an autonomous center of the Indira Gandhi National Open University (IGNOU), Delhi.

ii.ISLRTC launched the first Indian Sign Language Dictionary of 3000 terms in March 2018 and the 2nd edition of the dictionary of 6000 words in February 2019.

About World Federation of the Deaf(WFD):