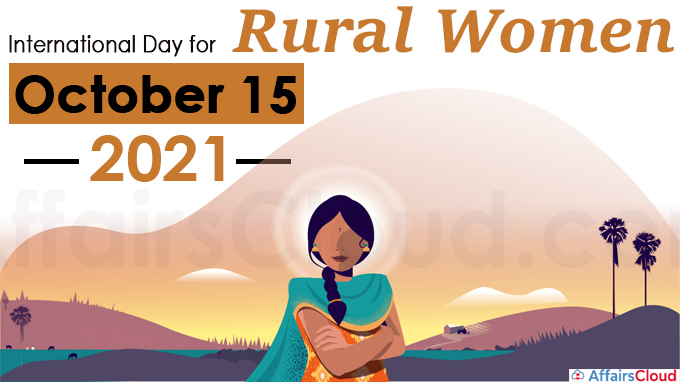 The United Nations (UN)’s International Day of Rural Women is annually observed across the world on October 15th to highlight the role of rural women and girls, including indigenous women, in ensuring the sustainability of rural households and communities, improving rural livelihoods, and overall well-being.

The theme of International Day of Rural Women 2021 is “Rural Women Cultivating Good Food for All”, which highlights the role of rural women and girls in the food system of the world.

i.The United Nations General Assembly(UNGA) adopted the resolution A/RES/62/136 on 18th December 2007, and proclaimed the 15th October of every year as the International Day of Rural Women.

ii.The first ever International Day of Rural Women was observed on 15th October 2008.

The rural women and girls play a major role in the food system from production, to processing, preparation, consumption, and distribution of food and also contribute to securing household and community nutrition.

In September 2021, UN Women launched the report titled “Beyond COVID-19: A Feminist plan for sustainability and social justice”, a practical roadmap for gender-responsive recovery from the effects of COVID-19.