With the purpose of promoting and upholding the principles of democracy, the United Nations General Assembly in 2007 resolved to observe 15th September as the International Day of Democracy and accordingly invited all member states and organizations to commemorate the day in an appropriate manner to raise public awareness. 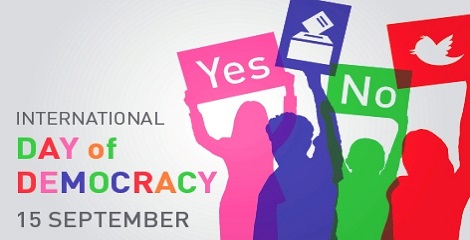 Democracy is a universal value based on the freely-expressed will of people to determine their own political, economic, social and cultural systems, and their full participation in all aspects of life. While democracies share common features, there is no single model of democracy.  More significantly, democracy does not belong to any country or region.

In September 1997 the Inter-Parliamentary Union (IPU) adopted a Universal Declaration on Democracy that affirms the principles of democracy, the elements and exercise of democratic government, and the international scope of democracy. The resolution entitled support by the United Nations system of efforts of Governments to promote and consolidate new or restored democracies was finally adopted by consensus on 8th November 2007.

The theme of this year’s International Day of Democracy was “Space for Civil Society”. Globally, the role of civil society has never been more important than this year, as the world prepares to implement a new development agenda, agreed to by all the nations worldwide. However, for civil society activists and organizations in a range of countries covering every continent, space is shrinking as some Governments have adopted restrictions that limit the ability of NGOs to work or to receive funding.

Democracy is self-determination in action and a necessary instrument for securing a more peaceful and stable world. Accordingly, civil society is a key partner to achieve this noble goal as it acts as a catalyst for social progress and economic growth. It also helps represent the diverse interests of the population, including its most vulnerable groups.

In particular, on this day we celebrate the values of freedom, respect for human rights and the principle of holding genuine elections by universal suffrage.