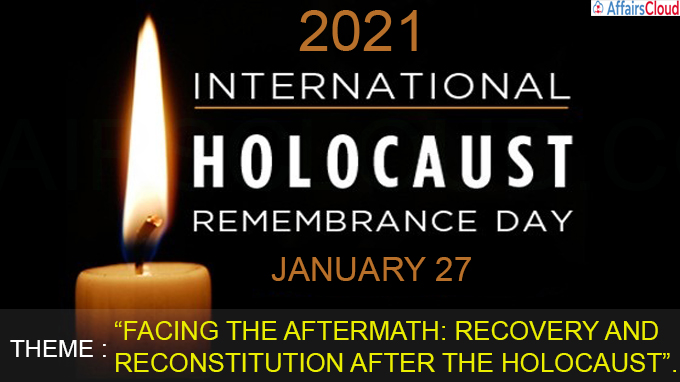 United Nations(UN)’s International Day of Commemoration in memory of the victims of the Holocaust (International Holocaust Remembrance Day) is annually observed across the globe on 27th January to commemorate the victims of the Tragedy of Holocaust during the World War II.  The date marks the anniversary of the liberation of the Nazi Concentration and Extermination Camp of Auschwitz-Birkenau by Soviet troops on 27 January 1945.

The year 2021 marks the 76th anniversary of the liberation of the Nazi German concentration and extermination camp Auschwitz-Birkenau.

The theme of 2021 International Holocaust Remembrance Day is “Facing the Aftermath: Recovery and Reconstitution after the Holocaust”.

The day focuses on the measures taken in the immediate aftermath of the Holocaust to start the process of recovery and reconstitution of individuals and community and system of justice.

The United Nations General Assembly (UNGA) adopted the resolution A/RES/60/7 on 1st November 2005 to established the United Nations Outreach Programme on Holocaust and proclaimed the 27th January of every year as the International Day of Commemoration in memory of the victims of the Holocaust.

Halocaust is also known as “The Shoah”, a systematic state-sponsored persecution and mass murder of around 6 million European Jews and more than 5 million of others, including Romani people, the intellectually disabled, dissidents and homosexuals by the German Nazi regime during World War II between 1933 and 1945.

i.UNESCO and UN in partnership with International Holocaust Remembrance Alliance (IHRA) organised a joint online ceremony and a panel discussion on “Holocaust Denial and Distortion” as a part of the commemoration of the international day.

ii.The online events are supported and partially produced by CNN.

iii.As a part of the 2021 International Holocaust Remembrance Day, the photo exhibition “Lest We Forget” featuring the victims of the Nazi persecution, devised by Luigi Toscano, German Photographer and filmmaker, in partnership with World Jewish Congress, the European Union, the Permanent Delegations of Austria, France and Germany to UNESCO, and the Austrian Cultural Forum in Paris.

iv.The exhibition is held at the UNESCO headquarters from 18th January to 12th February 2021.

v.Holocaust Memorial Day Trust launched a campaign “Be The Light in The Darkness”, with an aim to encourage everyone to reflect on humanity during and after genocide.

i.The UNESCO General Conference resolution 34C/61 on holocaust Remembrance highlights the historical significance of Holocaust and the importance of education about this event in preventing the genocide and related crimes.

ii.United Nations Security Council Resolution 2150 (2014) on “Recommitment to fight against genocide” highlight the importance of education as a means to raise awareness about the causes, dynamics and consequences of atrocity crimes.

iii.Education about the Holocaust and genocide are a part of the UNESCO’s efforts to promote Global Citizenship Education(GCED).